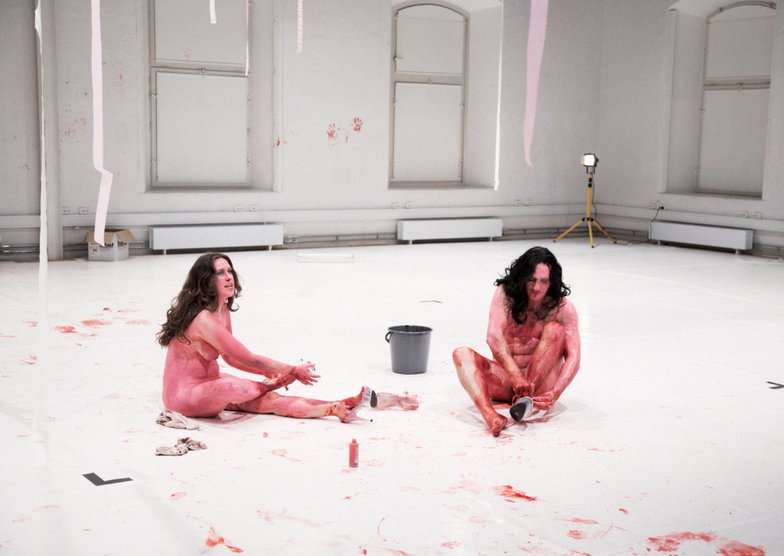 “I'm a very understanding woman” is a mix of dance expression, comedy, satire and generosity strengthened by loads of fake blood, make up, wigs and costumes. The work portrays the performers dream of a better world, a world seen through emotional, authentic, sometimes satirical, queer trans- utopian feminist glasses. In the glossy and dissolute, there is an undercurrent of suffering, secret knowledge, understanding and misunderstanding.

The performance takes off in expressions from Vaudevillian slapstick, drag and 1970’s horror movies. By recreating and exploring scenes from this genre the performers bodies become female bodies and the audiences gaze becomes the male gaze. I’m a very understanding woman is a violent love story where everyone is given the opportunity to become and be women, for life, or only for a while.

In the piece Sigourney and Apetrea develope strategies that integrate feminist values, night club aesthetics and anti-patriarchal ideas in contemporary dance. Through friction, resistance and struggle they create a performance that crushes our ideas about what it means being a woman, in dance, in drag and in the world.

With and by: Amanda Apetrea and Mica Sigourney

The show is a co-production between MDT, CounterPULSE, the ÖFA-collective and Köttinspektionen.

I’m a very understanding woman is funded by the Swedish Art Council and the city of Stockholm.

To understand is sometimes the most difficult thing a woman can do and yet this is something that has been asked of us for centuries. From Adam and Eve to the old greeks to the witch trials to sexual abuse to voting rights to less salary for the same job to taking care of the kids to being divine to wearing a push up bra to crying instead of making a point to hiding from a man who wants to kill us to having soft features and to being subordinate. Yes, we are understanding but that ends now. We start again by both understanding and misunderstanding, leaving behind a heteronormative misogynistic framework and exposing instead queer realities. I’m a very understanding Woman will be annoying and demanding just because of what she understands. It will be about death and birth, it will be about love and fear, about joy and despair. I’m a Very Understanding Woman is a dark comedy, sourced from presentations of womanhood in contemporary popular culture, 1970’s slasher films and comedy duos of american vaudeville. It dreams of a better world seen through deep emotional, genuine, sometimes satirical, queer-trans-utopian-feminist glasses. I’m a very understanding Woman will express the agony of years and years of understanding that this gender has had to put up with as well as the secret knowledges of misunderstanding.